Is The Surreal God Making Us Insecure About Being Missional? 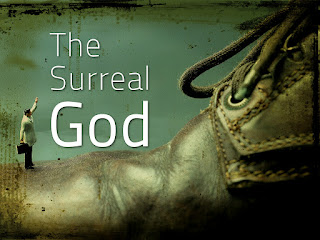 We all have a picture of God floating around in our head. I call it the Surreal God. Our imaginations entertain a God that is "other". This God stirs up emotion, reaction and passion in us. When most think of God they filter out anything that is not super-human, super-sized and larger than life.  Just forming the word God with our lips conjures up a Zeus-like looking character who's sitting high above the earth using his gavel to make sharp decisions about the world.

For most, infused into the word God is the idea of “Bigness.”

Here is an observed dynamic, my dear friends that are not convinced there is a God especially in the conscience of New Atheism believe in the "Bigness" idea of God as well. They have similar expectations on a god if one did exist. In Christopher Hitchens book God Is Not Great he said “If God did exist he would eradicate evil, injustice, needless suffering, he would swoop in and fix this world now” His reasoning goes; since God doesn't act like a god there must not be a God. In the mind’s eye of those who do believe and don’t believe in God I consistently find similar expectations. God is supposed to present himself in big ways. That’s what gods do, right?

The Surreal God is the god of our imaginations who shows himself in "Big" ways.


2000 years ago the 1st Century population had the same troubles with the Surreal God. The Israelites, who had loads of content on God (Yahweh) were convinced He would present himself in a "Big" way. This would only make sense to them since their interpretation of the law and data led them to believe in a God who is “other.”

Curiously, the Romans who did not believe in Yahweh believed God would present himself in a similar "Big" way. When God was dying on a wooded cross they mocked him for claiming to be God saying “call your angels and bring yourself down if you’re God.” They had expectations that a god would look a certain way and Jesus sure did not look like any god they were familiar with.

When we look at Jesus we are presented with a God that does not look like a god.

The way Jesus displays His glory does not look so glorious to the passerby. Jesus' own disciple’s were confused about “Glory” and the "Bigness" of God.  They expected glory to actualize a specific way, to them it would present with a certain feel, a certain look.  At one point they’re arguing about glory and Jesus over hears and says “you do not know what you are talking about.” Jesus knows that glory really is to reveal ones true character or true nature.  In His backdoor way Jesus corrects their "big" ideals and illustrates God's true character “the first will be last… I have not come to be served but to serve and to give my life away.”

For some reason in our imaginations Jesus takes a back seat to our super-sized big God.

But Jesus' arrival to planet earth was the pivotal move on God’s behalf to tell us “What God is really like.”  Jesus came to dismantle our Surreal God so that we could truly love the real God.  Jesus shows all his cards when he says “in me all the fullness of God dwells in bodily form.”  It's hard to cozy up to the Surreal God if you're emotionally honest. Martin Luther, a 6th century monk confessed this with brutal honesty when he journaled, “I was supposed to love this God but I couldn't conjure any up. God disliked me and I was tempted to not like him in return…"

I've discovered that missional energy in people can be connected to secret insecurity about a God-picture; a hidden embarrassment, defensiveness and confusion about the god swirling around in the recesses of their minds. Many fear unpacking this god-picture. There is an unspoken code to be quiet and just accept this god. It’s hard to love a God that is Surreal. For the sake of mission I'm convinced we need serious and thoughtful reconstruction of what God looks like through the blazing lens of Jesus.
Posted by Dan White Jr. at 5:50 PM

Email ThisBlogThis!Share to TwitterShare to FacebookShare to Pinterest
Labels: God in the flesh, Jesus, missional, the revelation of God