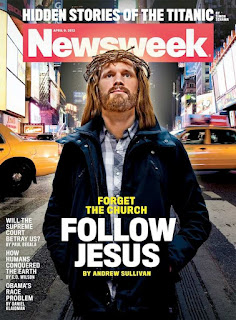 In his latest Newsweek article, Andrew Sullivan is proposing an idea to "Forget the Church and Follow Jesus." Sullivan thinks that saving Christianity is that simple.  Sullivan has accepted that for the sake of survival and purifying the church we need to leave it behind.  He writes that the church has "grafted American politics with Christianity:" I completely agree.   He states that "the church has been almost totally subverted by American culture;" I thoroughly agree.  He's spot on in declaring the church has butchered grace in how we've handled hot button issues such as woman's rights, racism, and homosexuality.  But the glaring problem with Sullivan’s argument is that he commits the same crime of syncretism by building his case stacked on two other highly esteemed American values; individualism and freedom from authority.  This whole mantra of “I’m into Jesus but not into church” is naive to its union with Americanism.   In fact, it’s so blindly soaked in individualism, that even the language focuses almost solely on the self; “My belief,” “my Jesus,” “my walk,” “who I’m called to be,” and so on.  There is absolutely no sense of community beyond a bunch of individuals, with individual beliefs, who support advocacy around justice and blog about their dissatisfaction with the church.  While this utopian ideal may seem like a good thing, the truth is that it never works.  Even more fundamentally it takes us further away from Jesus himself.

1. We cannot just follow Jesus as a profound teacher.  Yes, yes, yes we need to “return to what Jesus actually asked us to do and to be,” and return to a “simpler, purer, more apolitical Christianity.”  The Western/American Church has gotten in bed with power and believing change happens from acquiring more of it.  Jesus did conduct himself with —”calmness, love, acceptance, radical surrender and show us what it means to truly transcend our world.”  I too can understand why "it is no surprise that the fastest-growing segment of belief among the young is atheism,"   But I don’t think that the only way to address the current crisis of Christianity is by remaking Jesus in the image of St Francis or Ghandi or Martin Luther King.  It's natural to remake Jesus out of reaction to loud conservativism or liberalism but I'm sorry it's not a healthy catalyst for healthy formation.

Jesus’ “commandments” were not given as universal spiritual-ethical teachings.  Jesus was not a philosopher. We can learn from Him, but not by picking out the best bits, and not by ignoring the larger story.  Yes, we should be troubled to the core by the crisis that Sullivan describes.   Still, there is no way around it, Jesus came declaring that he was King, Ruler and Lord.  Those claims should stop us in our tracks.   They caused His own people to murder Him and the Roman Empire to see him as a serious threat to their dominance.  The larger context is that Jesus is addressing humanities constant rebellion against His gracious authority, unseating Satan’s dominion and declaring His love-filled rule is breaking in.  I’ve known a lot of young adults who’ve been burned by heavy handed theology and leadership, I was one of them.  So in reaction, it’s really easy to over-shoot the pendulum and to exclusively buy-in only to the humanity of Jesus.  But this cannot be done if we learn from Jesus on His terms.  He declares He is God, He is what God looks like and then invites us to submit to His charge over our lives.  When we wrestle through this then we can follow Jesus into the broken places in our world.

2. We cannot just follow Jesus without His followers.  I’ve said many times in moments of emotional honesty "I’d rather love Jesus than love Jesus in people."  I understand and I’m with you Andrew “Christians often make me nauseas.”  But to follow Jesus is to deal with His historical-rooted vision.  You must take seriously Jesus and the collective-movement He died and rose to birth.   He envisioned a renewed “people of God”; an actual committed community of people.   I know the word church has a massive stench to it; a stigma.  If you don’t want to call it the church, you don’t have to, but that is what Paul called it.  But you cannot get away from the concrete reality Jesus was teaching about.  Jesus did not envision a bunch of individuals who wander the earth living like enlightened-homeless-sages.   Church cannot be dissolved into a buzz of idealistic Jesus followers that just want to hang out.  The historical Jesus affirmed the continuing relevance of a chosen people, a people for God’s own possession, a kingdom of priests.  He envisioned a tethered-community of people submitting to each other, submitting to Him and submitting to working for the flourishing of the kingdom of God on this earth.  You can mess with the formula of church (I’m doing that as we speak). You can also loosen the ties with Systematic-Neo-Fundamentalist brands of theology (I've done that as well). You should also do your best to prophetically detach the “Body of Christ” from; materialism, obsession with numbers, intellectual dishonesty, enmeshment with politics, doctrinal arrogance and pastoral celebrity worship.  I’m all about trimming away the Christian culture fat but you can't have a church-less Christianity.  Remember the only Jesus we have—and the Jesus in the Gospels is a fully contextualized Jesus launching a new organization of people under His headship.
Posted by Dan White Jr. at 12:12 PM