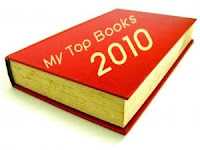 I read a lot of books last year some great some really cruddy. I thought I’d list a few of the best books I read from the year 2010. I won't list the books on my "cruddy" list.


1. Creation Untamed by Terence Fretheim – What is God's role in natural disasters and human suffering ? He shows the God of the Bible to be a compassionate, suffering, relational God, one we can turn to in prayer in times of disaster.

2. From Eternity to Here by Frank Viola - an intriguing walk through the scriptures in a three part story showing God’s passion to secure a bride.

3. The Emotionally Healthy Church by Peter Scazzero – I read this book a few years ago but the second time around its just as good. An emphasis on discipleship that is about emotional maturity.

4. Get Wisdom Get Insight by Katharine Dell – a fascinating introduction into Israel’s wisdom literature in the Old Testament. An exploration on how wisdom was handled versus prophecy.

5. Jesus the Final Days by Craig Evans and NT Wright – a collection of essays that examine the historitcal perspective of what happened at the death, burial and resurrection of Christ.

6. More Ready Than You Realize by Brian Mclaren – a very practical discussion on how to do evangelism to the postmodern mindset. This is like a postmodern sequel to C.S Lewis Mere Christianity.

7. The Way of the Heart by Henri Nouwen – a classic about solitude, silence and prayer in the spirit of the 4th and 5th century Desert Christians.

8. Thrones of Blood edited by William Whiston – the writings of Josephus capturing the world between 37 B.C to 70 A.D. Great exploration into the Jewish War, Herod the Great, the Roman empire and the city of Jerusalem.

9. Mentor Like Jesus by Regi Campbell and Andy Stanley - More time, spent with fewer people, equals greater kingdom impact. To further an all important message you need to invest in fewer people and commission them to multiply themselves, echoing the model set by Jesus.

10. The Passage by Justin Cronin – A trippy novel about the details of a post-apocalyptic world that is overrun by vampire-like beings that are infected by a highly contagious virus. What begins as a project to develop a new immunity-boosting drug based on a virus carried by an unnamed species of bat in South America eventually becomes the virus that transforms the world.

12. One.Life by Scot Mcknight - An invitation to discover what Jesus literally meant when He spoke.

13. Making Vision Stick by Andy Stanley - a short read on vision casting essentials. Make sure that the big picture stays clear.
Posted by Dan White Jr. at 10:28 AM