A Brief History of Rightness 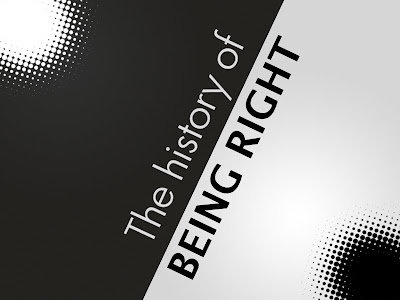 I like to be right, we all like to be right. There's something that strokes our ego and our identity when we feel like we are right. The obsession of being on the right side of an issue, of a debate, or of a group might seem like an honorable pursuit. Power, logical certainty and holding the theological high ground are attractive and intoxicating within the evangelical church. This “glory of knowing” seems on the surface an honorable and noble thing to apprehend; but the throne of knowledge and logical certainty that we think is attainable is proof of the cultural waters we swim in.

Our History of rightness
In the 13th century Thomas Aquinas (an immensely influential theologian and philosopher) carefully laid out a logical defense of the tenants and proofs of Christianity; and for the next couple of centuries, other thinkers pursued these goals to "shore up" every aspect of faith with logic. Aquinas fixed the relationship of theology to the science of logic. He believed reasoning would define who God is. Theological understanding at this time was marked by an emphasis on the absoluteness of truth and its knowability. A period of time called the Enlightenment was being birthed from the works of such scholars and the result was the absoluteness of rationalism. The unintended consequence over time was and is that it replaced the value of community, mystery, relationship and conversation. The fruits of the Enlightenment are less a period of time and more a way of processing and defining black and white. Out of the Enlightenment came the period of time called Modernity (1400's - 1970's) that promised to free humanity of irrational and relative thinking.

This force called Modernity ended up going on the offense against Christianity in the 18th and 19th century. Modernity served up major challenges to traditional Christian teachings on several fronts. The work of Charles Darwin and his colleagues established a theory that human species emerged through a process of evolution, rather than by a divine creator. Social scientists began demanding answers to Christian issues; the deity of Jesus, the existence of God, the notion of prayer, and the value of faith. The development of “Fundamentalism” around 1920 was Christianity’s response to this changing landscape. Christianity was brought into the boxing ring on Modernism's terms. Christian Fundamentalism went to work in arming itself with new weapons and fortresses. Christianity began defending the authority of its Scriptures, assembling its arguments against other world religions and philosophies, isolating itself from culture to remain untainted and granting itself moral judge of society’s problems. This spirit became synonymous more and more with being a Christian in the U.S in modern times. Mistakenly it’s often thought that isolation from the world, the constant defense of the Bible and zealous aggression over correct doctrine was the way of the early church as well as part of Paul’s ecclesiology. Here in the West this picture and prescription of doing church seems ingrained in our thinking. And hence we read the New Testament with this lens. But this emphasis is more indicative of cultures influence on us, the church, than it is coming from Jesus or Paul.
Posted by Dan White Jr. at 12:49 PM