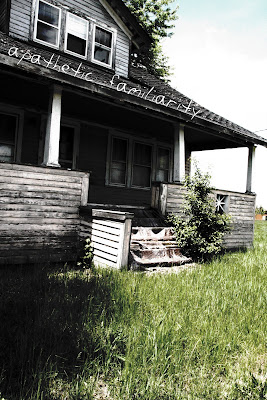 There was an older couple in their 70’s who had been married for 56 years. They had a fairly good marriage, getting along alright. They had their routine everyday; get up at 6am, she would get the paper for him, make him eggs-over-easy with toast and serve them with a black coffee on the side. He would read his paper and she would knit across the table from him in silence. After breakfast he’d go outside and work around the house fixing small things here and there as she made herself busy inside at their dining room table on her scrap book using pictures she kept in a shoe box over the years. At noon she would bring him out a tuna sandwich with a glass of prune juice so he didn’t have to stop working. She would then go inside and continue her scrap-booking. Almost every night, he would watch reruns of the Andy Griffin show from his deeply worn recliner while she would catch up on the lives of their kids, talking on the phone in the kitchen. She would always make sure to tell them that Dad said hello. Before bed he’d lock up the house and then they would both retire for the night. This was the routine everyday. One November the wife passed away from a stroke, suddenly leaving the husband to care for himself. In planning the funeral the minister asked him to tell him about his wife, “You know I don’t feel like I really knew my wife lately. It’s like we got so used to each other being around that we thought there was nothing left to find out about each other. We were together but she would do her thing and I would do mine. I would occasionally overhear her tell our kids things she was thinking that she never told me. It’s sad but I often thought why ask questions when I already know the answers.”

If you’ve been around the organized evangelical church for a while it can become easy to think you’ve got Christianity and it’s tenants pretty much figured out. It’s often in this environment of apathetic familiarity with our beliefs that the mission, story and the nature of God slips away from us. We become so accustomed to what we think God is about that we don’t feel the need to ask questions any more or maybe we don't feel the need to rediscover Him because we're already in.

Jesus spoke in parables and in Matthew 13:34 he makes the point that “Jesus did not say anything without using parables.” Why would Jesus indulge in short artistic fictional stories to convey such essential messages? Each parable would often end with the refrain “who ever has ears let him hear.” Each parable would often include a hidden message that would be accessible to some and confusing to others. At one point the disciples share their frustration “Why do you speak in parables?” As if to say “Jesus why are you doing this? Your telling stories but nobody is getting your point, can you find a clearer more obvious approach?” What the disciples did not understand was Jesus was intentionally enticing people into new territory. Jesus was not offering easy answers and doctrinal points, he was inviting people into an interactive relationship. He said listen with your ears which meant listen to the deeper meaning; don’t just listen for the literal meaning. Isaiah the prophet said that when people’s hearts become calloused, they lose their ability to see and hear at deeper levels.

Subtly and slowly our relationship with Jesus and his Kingdom can become like that old couple, sure we're together but “I don’t ask questions anymore because I think I already know the answers.” Are you asking questions about God? Are you asking questions of God? Are you afraid to engage God with things you thought you already had nailed down? Don't let belief numb your heart and cause you imagination and soul to fall asleep.
Posted by Dan White Jr. at 7:45 PM