Why I Lean Anabaptist 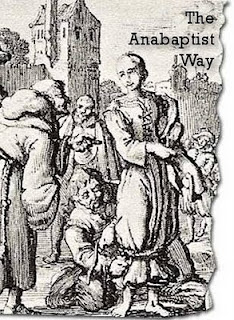 I'm not a denominational guy. I've always had issues with the whole concept of denominations. Still there's always been something about the Anabaptist movement that's tickled my ears. It wasn’t until I was in my early twenties that I even heard about the Anabaptists. When I was in college I studied the Reformation but my Prof seemed to gloss over the Anabaptist movement that birthed during the same time in church history. I always found it curious why he barely mentioned them, so back then I began to investigate on my own. I dove into a book called "The Reformers and their Stepchildren" by Leonard Verdui and another titled "Anabaptists and the Sword" by James M. Stayer. I came to understand why my Reformed professor didn't talk much about the Anabaptist's. Reformers in the 16th Century violently persecuted them. The Protestant Reformers under Zwingli were the first to persecute the Anabaptists using torture and executions. True to their convictions from what Jesus modeled, the Anabaptist responded with nonviolence.

I'm not a fan of all the paths the Anabaptist movement has wandered down. Nor do I embrace in entirety their ecclesiology. Still I’m convinced a good chunk of the principles of Anabaptist's offer something to a growing segment of culture that is burnt out on religion and is suspicious of the evangelical church world. Personally, I think that the Anabaptist movement offers a counter-story to the negative aspects of Christianity that have dominated most churches and Christian institutions. Non-Christians associate Christianity with power, greed, control, personal piety, and being-in-bed with political parties – but Anabaptist's seem to have a better story to tell!

Here are some of the values that resonate deeply with me that come out of the Anabaptist tradition.

1. Jesus is our example, friend, redeemer and Lord – Jesus didn't just come to save us but he came to show us how to live. His earthly life is a template for a life actively submitting to His Lordship.

2. Holiness is greater love - The Sermon on the Mount is the great manifesto for what a holy life begins to look like and it looks like serious, selfless, God-honoring love.

3. Jesus is the focal point of God’s revelation – Jesus is the interpretive lens that the Old and New Testament are to be understood through. The character and actions of God must be comprehended first by looking at Jesus.

3. The Cross is primarily seen as victory over Satan and death (Christus Victor) and secondarily understood as the consequence for our sin (Penal Substitution) - Jesus came to bind up the strong man and free us to follow him. The Cross is less about God's anger towards humans but more about God's relentless pursuit to reclaim humanity by doing battle with the enemy on the cross.

4. The frequent association with power poisons the nature of the church - status, wealth and force distort the witness of the body of Christ. Abstaining from voting for political candidates is a practice in solidarity. Effecting change from positions of power might seem most impactful but Jesus modeled the surrender of power to capture hearts.

5. Who you identify with is extremely important - Jesus risked his reputation with the religious to identify with the poor and suffering of our world. The church should carefully consider how they are identified and perceived by outsiders to the religious establishment.

6. Churches are called to create communities of mutual respect and mature love first, before orthodoxy and order - truth and doctrine are important but they are not necessarily the signs of spiritual health. How we relate with one another is the first and most important sign the Holy Spirit is among us. In an age of individualism, Anabaptists model a communal faith that fosters authentic relationships and the value of the whole body.

7. Spirituality and economics are inter-connected – In an age of consumerism, Jesus calls us to a simple life that leads to generosity with our time and money.

8. Peace is at the heart of the gospel – Nonviolence, as modeled by Jesus, is evidence of the good news of the kingdom. The believer must not use forcible resistance to wrongdoers, nor wield the sword.

9. The Kingdom is Now - Jesus resurrection launched the movement of the Kingdom of God on earth. Heaven is not some off distant place we go to when we die. Jesus is building His Kingdom here and now. Will we work for him? So be careful about giving you loyalty to any other power structure or empire.

There is a lot more to the Anabaptist way but these are a few of the things that I can get behind. Maybe I lean a little more Anabaptist than I do anything else.

P.S. There is a fairly new book out titled "The Naked Anabaptist" by Stuart Murray if your interested in finding out more.
Posted by Dan White Jr. at 8:54 AM