What Does It Mean To Be Human? 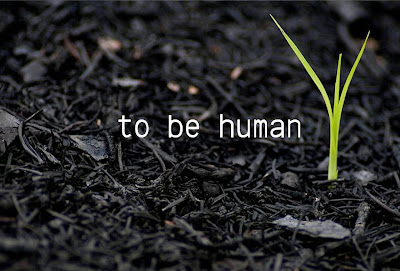 What does it mean to be human? I used to think that the more human I was the more sinful I was. My definition of being human was closely associated with sinfulness and rebellion against God. To be human was not a good thing. Being human equaled being “fleshly” or “worldly”. I think that is why so often preachers like to emphasis the Holiness of God more than the Incarnation of God in Jesus. Here is the question; do we become more holy the less human we become?

My answer… no. Humanity was and is God’s idea. There is a mysterious splendor in the concept of being truly human, this is what I believe Jesus precisely portrays and declares with his life, being and teachings. Jesus was and is the definition of what it means to be fully human. Jesus is God’s original thought of what it looks like to be in the flesh. Jesus reclaimed the fully human life that affirmed a new sense of identity and dependence on God. It was stated from his own mouth that “I do nothing except for what the Father does (Matt 27:50)”, “as I am loved by the Father so I love you (John 20:17).” and “the Father has sent me (John 15:5).” These are powerful identity markers; declarative statements of how Jesus sees himself. Jesus self-awareness of what made him fully human is completely on display. Jesus operational mode was; intense inner connectedness to the truth that he was loved by the Father, sent into the world by the Father and given direction by the Father. Jesus sense of self is God-centered not self-centered.

The enemy of this world wants to convince us that to be fully human or “fully you” is to be self-made, consumed with stuff for yourself, independent, grasping at control over your life and utterly concerned with how people perceive you. This was the trickery in the Garden of Eden. God’s rule about not eating from the tree had little to do with “just obey me”. It was more about God’s intention that humanity find their source of self, fulfillment, provision, vocation and governance in Him alone.  Instead Satan told the fattest ugliest lie, “to be human is to be self-reliant and independent of God”.

Jesus did not come to eradicate us but to call us out to a new way of being human.  Jesus inaugurated the beginning of an ever increasing way to be you. Despite a lot of church publicity it doesn’t come from the rejection of pleasure or self denial; this only leads to guilt, condemnation and legalism. What Jesus is doing is challenging us to “remain in him” as he remained in his Father (John 15). According John 15 this is how our lives will start to bust forth fruit as it was intended to.

Our humanity needs to be recalibrated under the Leadership and Lordship of Jesus. It is when we willingly submit our lives to his loving care, sense of commission in the circles around us and directives to make choices as He would, that our lives make sense and bear much fruit. This what I believe Romans 13:14 means when it says “put on the Lord Jesus Christ.”  This is a new way to work, relate, spend, and live. To stay under Jesus governance, direction, and love is a constant tweaking, refocusing and realignment. When you live life from this place you know and feel and potentially might say out loud “so this is what it’s like to be fully human."


(A.D.D moment here but this is why we need connected Christian community so bad, to show us a mirror and nudge us back under Jesus love and rule, because we slide out of this place of self-awareness so easily on our own).

Two good books to read that touch on this are Abba's Child by Brennon Manning and The Great Omission by Dallas Willard.
Posted by Dan White Jr. at 10:09 AM